I think part of why this movie has resonated with me so much over the years, and even more so as I’ve gotten older, can be summed up by the scene in the bowling alley.

What would you do if you were stuck in one place, and every day was exactly the same, and nothing that you did mattered?

That about sums it up for me.

In one day, Phil goes from just doing his job, to being stuck in one place with no escape, to the thrilling freedom of doing whatever he wants, to chasing money and women, to depression from the hopelessness of not being able to escape being stuck in that one day. The writer of the movie has said in interviews that he pictured thousands of years passing as Phil learned and evolved and re-lived that one day over and over. For me, I’m only 39, but I’ve definitely had those days, those seasons of my life, where I felt like I was just reliving the same day over and over again, stuck in one place, and no nothing I did mattered to anyone.

For Phil, the switch flipped when he decided to help people and improve himself. He decided the world didn’t revolve around him, and what we don’t see, but can infer, is that he is still stuck in that place, doing the same thing over and over again, maybe for another thousand years. But this time, he’s happy. He has purpose.

And yes… there’s a love story that distracts from what is really happening here. Because ultimately it’s not about him getting the girl. It’s about him finding joy in the simple things, finding joy in the things that aren’t all about him. He finds purpose, even in the monotony of one place, one day, always the same.

I don’t know about you, but in 2017, this is the thing, more than anything, I need to figure out. It’s already February. And today is another day. Just like yesterday. Just like the day before. But it’s time to get unstuck. Past time, really. 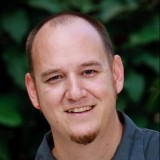